There are many Popes that wrote, praising the life, Rule and spiritual heritage of St. Benedict. Remember Pius XII, Paul VI and John Paul II. Recently, Benedict also left us a precious text. Here is it to our readers. GENERAL AUDIENCE Wednesday, 9th, April 2008.

Would like to speak about St. Benedict, founder of Western monasticism, and also patron of my pontificate. I begin with words of St. Gregory the Great, who writes of St. Benedict: “The man of God who shone on this earth with so many miracles not shined less by the eloquence with which he set out his doctrine” (Dial II, 36.). The great Pope wrote these words in the year 592; The holy monk had died 50 years earlier and was still alive in the memory of people especially in the flourishing religious Order he founded. St. Benedict of Norcia with his life and his work had a fundamental influence on the development of civilization and European culture. The most important source about his life is the second book about dialogues of St. Gregory Magno. It is not a biography in the classical sense. According to his ideas, he intends to illustrate by the example of a concrete man, precisely St. Benedict the ascent to the peak of contemplation which can be achieved by those who abandon themselves to God.   Therefore, there is a model of human life as the climb to the summit of perfection. St. Gregory Magno recounts also in this book from dialogues, many miracles performed by the Holy, and also here not to simply narrate something strange, but demonstrate how God, by admonishing, helping and even punishing, intervenes in the concrete situations of human life. Wants to show that God is not a distant hypothesis placed at the origin of the world, but is present in the life of man, of every man.

This perspective of the “biographer” is also explained in the light of the general context of his time: between the V and VI centuries the world was surrounded by a tremendous crisis of values and institutions caused by the fall of the Roman Empire, the new invasion peoples and the decay of morals. With the presentation of St. Benedict as a “luminous star,” Gregory wanted to indicate this troubled situation, in the city of Rome, the exit of the “dark night of history” (cf. John Paul II, Insegnamenti, II / 1, 1979 p. 1158). In fact, the work of the Holy and, in particular their rule, have been bearers of an authentic spiritual leaven which has changed over the centuries, far beyond the confines of his country and of his time, the face of Europe, raising after the fall of the political unity created by the Roman empire a new spiritual and cultural unity, the Christian faith shared by the peoples of the continent. It came thus to reality to which we call “Europe”.

The birth of St. Benedict is dated around 480. Came, like says St. Gregory, “ex provincia Nursiae” of Nurcia. His wealthy parents sent him to Rome for their training in school. But he did not stay long in the Eternal City. As a fully credible explanation, Gregory mentions that the young Benedict felt revulsion at lifestyle of many of his fellow students, who lived dissolute way, and did not want to make the same mistakes them. Wanted pleases God alone; “Soli Deo placere desiderans” (II Dial., Prol. 1). Thus, even before the completion of his studies, Benedict left Rome and withdrew in the solitude of the mountains east of the city. After a short stay in the village of Effide (now Affile), where for a time he lived with a “religious community” of monks, became hermit nearby of that place, in Subiaco. He lived completely alone for three years in a cave which, from the Middle Ages, becomes the “heart” of a Benedictine monastery called “Sagrada Espelunca”. The period in Subiaco, marked by solitude with God, was for Benedict a time of maturation. There had to endure and overcome the three fundamental temptations of every human being: the temptation of self-reliance and the desire to put himself in the center, the temptation of sensuality and, finally, the temptation of anger and revenge.  In fact, Benedict was convinced that only after overcoming these temptations, he could tell to the others a useful word for their situations of need. And so, having a pacified soul, was able to fully control the impulses of himself, to thus be a creator of peace around them. Only then he decided to found his first monasteries in the Anio valley, near Subiaco.

In the year 529, Benedict left Subiaco to establish himself in Montecassino. Some have explained this move as an escape from the machinations of an envious local cleric. But this attempted explanation proved unconvincing, given that Benedict did not return there after the sudden death of it (II Dial. 8). In fact, this decision was imposed to him because he had entered a new phase of his inner maturity and monastic experience.  According to Gregory Magno, the exodus from the remote valley of Anio to Mount Cassio in a time, dominating the vast surrounding plain, is seen in the distance has a symbolic character: the monastic life hiddenness has its raison d’être but a monastery also has a public purpose in your life of the Church and society, should give visibility to faith as a life force. In fact, when, on 21 March 574, Benedict completed his earthly life, left with his Rule and the Benedictine family he founded a heritage that has in the past centuries and still continues to bear fruits in the world.

Throughout the second book of the Dialogues, Gregory shows us how the life of St. Benedict was immersed in an atmosphere of prayer, bearing foundation of his existence. Without prayer there is no experience of God. But Benedict’s spirituality was not an interiority removed from reality. In the excitement and confusion of his time, he lived under the gaze of God, and thus never lost sight of the duties of everyday life and the man with their specific needs. Seeing God understood the reality of man and his mission. In his Rule he describes monastic life “a school at the service of the Lord” (Prol. 45) and asks his monks that “the work of God [that is, the Divine Office or Liturgy of the Hours] let nothing intervene” (43, 3). But it emphasizes that prayer is primarily a listening act (Prol. 9-11), which then must be translated into concrete action. “The Lord expects us to respond every day to the facts to his teachings,” he says (Prol. 35).  So the monk’s life becomes a fruitful symbiosis between action and contemplation “that in all things God may be glorified” (57: 9). In contrast with an easy and egocentric self-realization, now often exalted, the first and indispensable disciple’s commitment to St. Benedict is the sincere search for God (58, 7) on the path mapped out by the humble and obedient Christ (5, 13), the love of which it should put before anything (4, 21, 72, 11) and in this way, in the service of another, becomes a man of the service and peace. In the practice of obedience made with faith inspired by love (5, 2), the monk achieves humility (5, 1), to which the Rule dedicates an entire chapter (7). Thus the man increasingly becomes near of Christ and attains true self-fulfilment as a creature in the image and likeness of God.

The obedience of the disciple must correspond with the wisdom of the Abbot, who has in the monastery “the functions of Christ” (2, 2, 63, 13). His figure, described above all in the second chapter of the Rule with a profile of spiritual beauty and demanding commitment, can be considered as a self-portrait of Benedict, because as writes Gregory Magno “the Holy can’t teach a differently from how he lived “(Dial. II, 36). The Abbot must be tender and a severe teacher at the same time (2, 24), a true educator. Inflexible against vices, it is nevertheless called above all for imitate the tenderness of the Good Shepherd (27, 8), the “help and not to dominate” (64, 8), “emphasize more with facts than with words everything that is good and holy “and” illustrate the divine precepts by his example “(2, 12). To be able to decide responsibly, the Abbot must also be a man who listens to “the advice of brothers” (3: 2), because “God often reveals to the youngest what is best” (3, 3). This provision makes it surprisingly modern one writing rule for almost fifteen centuries! A man with public responsibility, and even in small circles must always be also a man who knows how to listen and learn as hear. 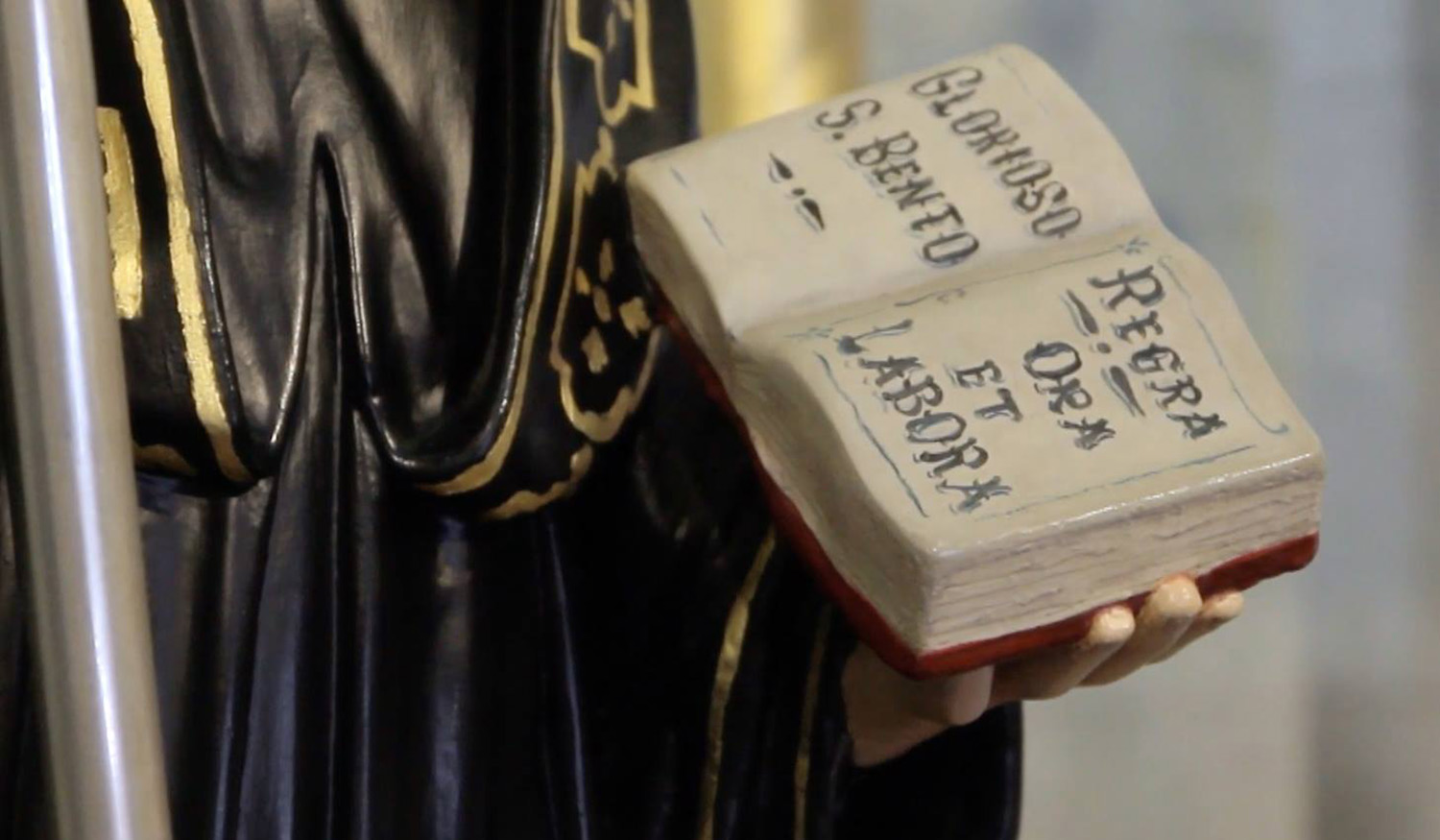 Benedict describes the Rule as “minimal, drawn only to the beginning” (73, 8); but in reality it can provide useful information not only for monks but for all who seek a guide on their way to God. For its prudence, its humanity and its discernment between the essential and the secondary in spiritual life, he was able to maintain its illuminating power even to today. Paul VI, proclaiming the 24th October 1964 Saint Benedict Patron of Europe, intended to recognize the marvellous work performed by the Saint achieved with his Rule for the formation of civilization and European culture. Today Europe that just came out of a deeply wounded century by two world wars and after the collapse of the great ideologies that were revealed as tragic utopias are in search of their own identity. To create a new and lasting unity, they are certainly important political, economic and legal instruments, but it is also necessary to awaken an ethical and spiritual renewal which inspire the continent’s Christian roots, because otherwise you cannot rebuild Europe. Without this vital point, man remains exposed to the danger of succumbing to the ancient temptation of wanting to redeem himself, utopia that, in different ways, in twentieth-century Europe caused, as revealed by Pope John Paul II, “an unprecedented return to torment mankind’s history “(Insegnamenti, XIII / 1, 1990, p. 58). Looking for real progress, we also heard today the Rule of St Benedict as a light to our path. The great monk remains a true master at whose teach we can learn the art of living true humanism.